This is the second post in a series. For the general introduction, please read this post first: On the Proportions of the Human Body

The idea for these posts came from the opposing views that the Voynich nymphs are badly drawn on the one hand, and that they have culturally meaningful proportions on the other. For the latter view, see for example this post by D.N. O’Donovan.

I chose to investigate whether the body proportions of the human figures are consistent throughout the manuscript, since this is one possible indicator of an illustrator’s skill.

Let’s start with an example of a manuscript with really awful illustrations, as there are many to be found. I chose the first one I encountered on the Warburg Institute website, the 9th century manuscript Paris, Bibliothèque Nationale, lat. 12957. Let’s submit it to our “head proportion” test.

As we can see, proportion was of no concern to this illustrator. To reach the female figure’s height, we would have to stack her head 11.5 times, while for her male counterpart we’d only need six heads. And that’s not even getting into the other proportion related problems, like the fact that the woman could wrap her entire head in her giant hands and that the man’s buttocks are where his lower back should be. There is no consistency and an apparent lack of spatial insight.

Now to get to the point. I measured three proportions on a large number of nymphs from various sections: amount of heads from top to navel, top to knee and top to bottom. The results were surprisingly consistent, with about half a head of difference between the largest and smallest proportion. For example, all nymphs I was able to measure on f.73r were between 4.2 and 4.6 heads tall. Considering the fact that the Voynich manuscript is relatively small, this is an insignificant difference compared to the 6.1-11.5 spread in the Paris manuscript.

I then wanted to know whether proportions would be consistent throughout the entire manuscript. So I took the median values of all measurements for each section. These are the results:

As we can see, the proportions are consistent throughout the manuscript, with all differences smaller than half a head. The overall median is 2.3 heads from top to navel, 3.4 heads from top to the knee (middle) of the straight leg, and 4.3 heads for the total height.

This means that most nymphs are about four heads tall, with approximately one head length per section. Remember that classical sculptures and Nick Pelling are eight heads tall, which is double the amount of heads!

In yesterday’s post, I measured that runway models like Cara Delevingne are made to look as if they are more than 8.5 heads tall, which is a bit much. In the below image I edited her vertical proportions to those of our nymphs.

One might say that her proportions look average now, but the head has become enormous. This is how the nymphs are proportioned – virtually all of them.

CONCLUSION: Voynich nymphs are on average 4.3 heads tall. The chin, the navel and the knee of the straight leg can be used to approximately divide the body in four parts. This holds true for the vast majority of the human figures in the manuscript.

HOWEVER, there are some fascinating exceptions. Let’s have a look at the odd cases.

First of all, out of curiosity, I measured both human figures in the marginalia. The woman in the f116r margin is exactly four heads tall, putting her just a bit below average but right on the 2/3/4 standard. The “sick” figure on f66r measures a little above the 4.3 average with a size of 4.6 heads. This makes both marginal figures perfectly normal – to Voynich standards.

I also measured the human figures in the month emblems.  The Archer measures in at 4.2 heads, well within the normal spectrum. Virgo is hard to measure since she/he is wearing a robe. Measured from the top of the head to the ground, the figure is 4.8 heads tall, which is relatively large. A similar estimation was required for the female “twin”, who is a standard 4.1 heads tall.

Now for the weird part. There are only a couple of unambiguous men among the human figures. We have already mentioned the Archer, who has standard Voynich proportions. However, something very strange is going on with the other men whose full length can be measured. Remember that this is about proportions, NOT absolute size. We are comparing the size of the head and the rest of the body.

Apart from the archer, I was able to measure six “full bodied” men. One of them, the young fellow on the top right of f.76v, has a height of 5.4 times his head – the highest proportion of any figure I measured, and a full head taller than the average of 4.3.

That is nothing, though, compared to the five remaining gentlemen. Their full body length is, consistently, 3.7 times the size of their head. 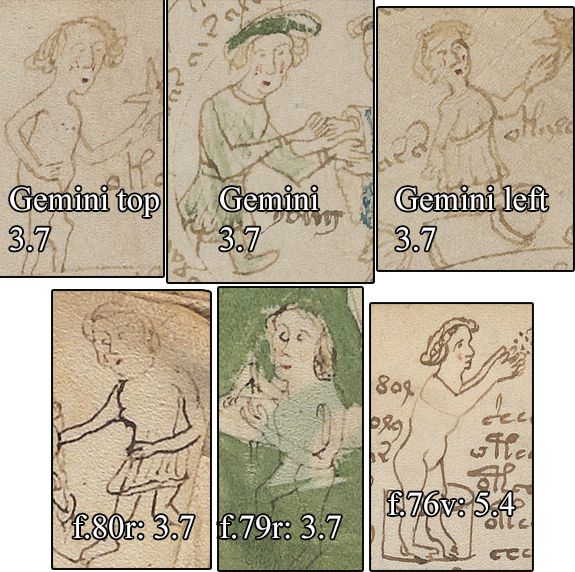 In other words, these five men – three of which are found on the “Gemini” page, have even more stunted proportions than the Voynich women. They are “only” 0.6 head below the average, but this still makes them outliers. That these are all men seems significant, though I don’t know what it could mean.

This concludes the part of the series where I explain the gathered data. In the next post, we will compare these proportions to those found in various other art forms.

One thought on “On the Proportions of Voynich Nymphs”