Osiris is the general name of the Sun […]. His return from Ethiopia marks the period when returning from the Tropic of Capricorn, he proceeds towards the Equator, and passes through the winter signs.  – From Letters on Egypt

In the previous post about f.79v, I discussed my identification of two figures as Argo Navis and Piscis Austrinus, two constellations that lie far south of the ecliptic. The current post will treat the remaining figures on this folio.

One consistent indicator in quire 13a appears to be that, if green water or green details are present, a southern constellation is meant. Note that the opposite is not true for blue, which is used much more generally. But green is consistently chosen to stand out as an indicator of a southern latitude. This means then, that we remain in the south, since all the action takes place around a green pool.

Let’s start with the most prominent figure: fish man. I must admit that the nature of this hybrid or pair has long been a mystery to me. It looks like a weird, wide mouthed fish which somehow has an androgynous nymph standing around in its mouth. But the overall appearance of the pair has led quite a number of researchers to interpret it as a nymph with a fish tail instead. 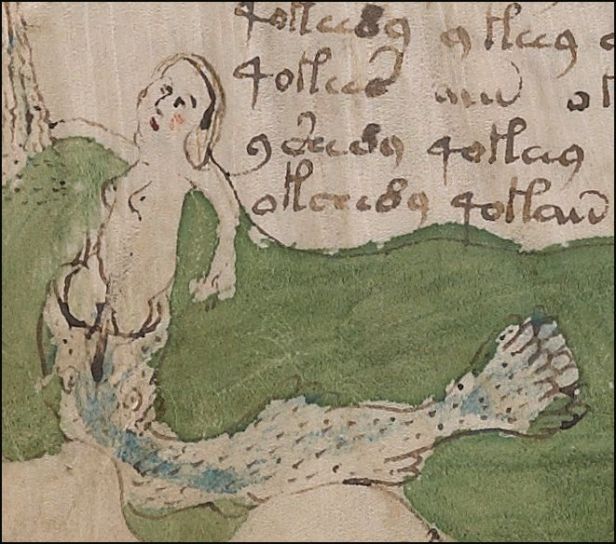 It might be of interest that nowhere in the manuscript an nymph’s physical integrity is violated. Nymphs are always complete, as far as we can see. So it might be that, even if a hybrid creature was meant, the symbolic nature of the nymphs did not allow for such a thing to happen. Another possibility is that the nymph’s legs needed to be visible, which led to the somewhat strange “walking around in fish mouth” result. Finally, as a general note about this pool, it must be mentioned that the makers of the manuscript have been messing around here, with corrections, erasures and the overpainting of many details.

So, what could this fishy nymph represent? Usually the nymphs symbolize something all by themselves, so does this mean we are looking for a composite being? Half fish, half something else?

What lives in the southern parts of the sky and has the tail of a fish, but the body of another creature?

(scroll down for the answer)

Egyptian priests and some poets say that once when many gods had assembled in Egypt, suddenly Typhon, an exceedingly fierce monster and deadly enemy of the gods, came to that place. Terrified by him, they changed their shapes into other forms: Mercury became an ibis, Apollo, the bird that is called Thracian, Diana, a cat. For this reason they say the Egyptians do not permit these creatures to be injured, because they are called representations of gods. At this same time, they say, Pan cast himself into the river, making the lower part of his body a fish, and the rest a goat, and thus escaped from Typhon. Jove, admiring his shrewdness, put his likeness among the constellations.

– Hygnus on the origin of the Capricornus constellation.

It is remarkable that the image of the goat-fish  – and men-fish – was already known in Babylonian times and remained virtually unchanged. Below two Sumerian examples and a Roman coin for comparison. 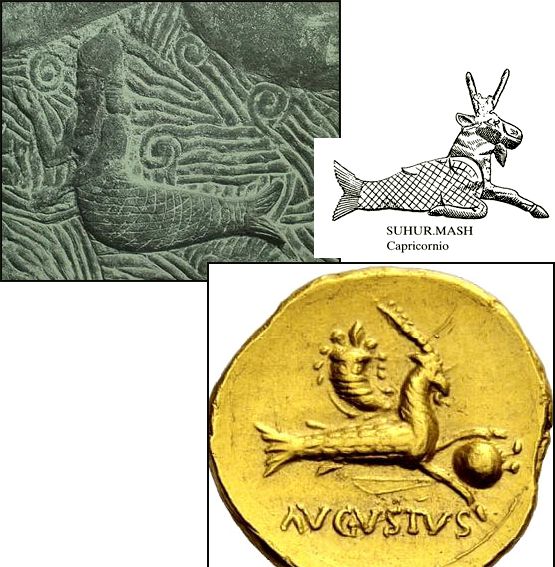 In the time of the classical authors, Capricorn sat mostly above the tropic that bears its name, only touching it with its southernmost parts. This explains why the fish-nymph appears to float on top of the water rather than being submerged. The bottom shoreline only hides some bits of tail, which is appropriate.

Now for the other creatures. There are four left, each in a different color: green, blue, red and yellow. Coincidentally, there are also four creatures left hanging around on the tropic of Capricorn: Sagittarius, Centaurus, Lupus and Scorpius. The top part of the following image is taken from the Farnese Atlas. I have traced the Tropic of Capricorn in green and marked the creatures in their corresponding colors. 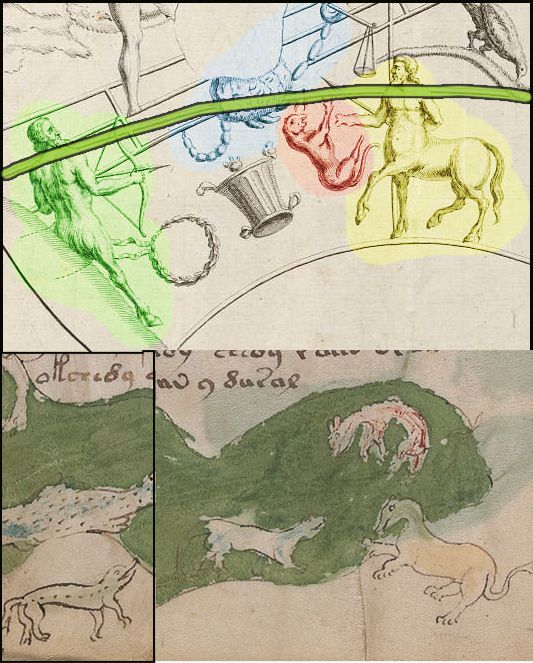 Before I realized that the fish-nymph might be Capricorn, I suspected that the slender green thing might represent Sagitta, the arrow. Of course, then, it might as well represent the bow and arrow of Sagittarius, which barely pokes the tropic, just like the creature’s nose is slightly over the edge of the water.

Sagittarius’ arrow points at the tail of Scorpius, which crosses the tropic, just like some of the scorpion’s leg. The green creature is indeed looking (pointing) towards the blue creature, and blue’s tail and legs are under the water! So if the water does represent the tropic of Capricorn, then this illustration renders with surprising accuracy that the tail is on the “other side” compared to the head and torso. Might the blue one be Scorpius? 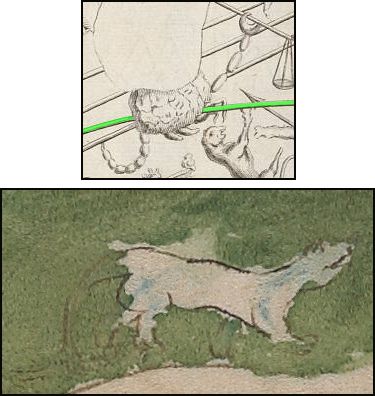 “But”, I hear you object, “that thing doesn’t look like a scorpion at all!” Well no, it doesn’t, but neither does the “Scorpio” in the Voynich Zodiac section. In fact, I will go on the record here and say that the “zodiac Scorpio” looks even less like a scorpion than the blue creature in the water. Its head is even shaped like a claw, for some reason.

This means that there are two creatures left to analyze. The yellow one which looks like a rearing lion/horse hybrid, and the red one with the curved back. And there are two constellations left in the relevant area as well: Lupus and the Centaur.

First, a note on the constellation Lupus. Even those who don’t read Latin will likely know that Lupus means wolf, yet the constellation is not a wolf at all. It is usually described together with the Centaur, as an undetermined “creature” killed by the latter. Hyginus says that the Centaur is carrying “a victim” to the altar as a sacrifice, not specifying the species. Aratus knows it as the beast, “for so men of old have named it”. In conclusion, Lupus as a dead beast close to the Centaur.

As a consequence of this vagueness, the illustrative tradition shows a lot of variation in the depiction of the Beast. Some will go by the name Lupus and draw a canine. Other traditions draw a large feline. Usually, however, an edible animal is chosen, like a rabbit or a goat. Lupus can be in various places as well, on the Centaur’s spear or in his hand, in front of him or behind his back. Not even its number is certain: several Centaurs have been given two creatures just for good measure.

In a few examples, like the one above, Centaurus looks like a lion-horse-human hybrid, but there is always a human component present. The only exception, treated by Kristin Lippincott as a Centaurus, is this unique creature from a manuscript by Prosdocimus de Beldemandis: Bodleian MS. Canon. Misc. 554. 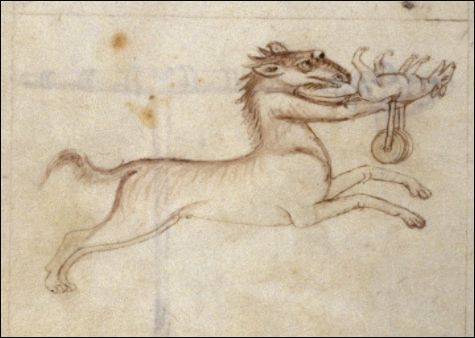 One thing for sure about the Beast (Lupus) is that it’s dead. And it is exactly the limp, somewhat lifeless pose of the red creature which has inspired a number of Voynich researchers to link this image to that of a destructive flood. It is, in other words, not as big of a stretch as it might seem to read the yellow creature as the hunter and the red one as its catch.

There are only two constellations left in this piece of sky which I haven’t assigned yet: Ara (the altar) and the Southern Crown. There is also one section of the folio left, so if everything works out this should contain an allusion to an altar and a crown:

It seems clear to me that these are two independent structures. On top, a nymph standing in a tube and reaching at two cylinders. Below, a central pipe surrounded by three circles…

I’m not sure yet what to make of these and how to work out the details; reader insights are welcome 🙂

4 thoughts on “South of the Sea Goat (continued)”