I have wondered many times – as surely many have before me – if the water flows on quire 13b are supposed to connect certain folios to others. Let’s take f.81v as an example to show you what I mean. This folio features just one “pool”. The water is supplied by one stream which appears seemingly out of nowhere along the left margin and it leaves the folio in a similar manner at the bottom right.

So my research question for this post is simple: is it possible that water flows are to be read as connections to other folios? In other words, can these folios be put together like a puzzle? It must be noted that some pages are clearly self-contained, but this does not affect the possibility that others are implicitly linked.

I don’t mean that the folios were originally one single piece, though they may have been copied from a source where they did form one whole. The VM does contain a number of large foldout pages, and a shortage of such sheets may have contributed to the division we have now. The flows of water appearing and disappearing may be a creative solution to cope with the fragmentation of one larger drawing. But there is no way to know whether this was the case. If so, they were likely taken from a map that focuses on the relative layout of bodies of water and connecting rivers.

One complicating factor is the broadly accepted fact that the folios in quire 13 (and indeed others) are out of order. Many researchers, including myself, believe that quire 13 was originally divided into two separate sections. One indication for the “mess up” is that the pools on f.78v and f.81r, which are on the same side of a single bifolio, are clearly linked. This despite the fact that now, in the current binding order, there are several pages in between. The following image shows the relevant section of both pages, though keep in mind that there is no perfect match because a portion of the junction is obscured by the pages in between.

The fact that this connection is unmistakably there, means that the pools are indeed connected across folios. Since these are on the same bifolio, though, they may have originally been visible right next to each other.

What’s in a mountain?

Another thing to get out of the way first is that of “water origins”. Quire 13b features certain structures or patterns from which water flows onto the page. These look like little semi-circles stacked on top of each other. If the water flows are truly rivers like on a map, then these structures might be highlands or mountain ranges, which are often the original source of rivers. Compare two of these structures inset in a map from the Ghent Liber Floridus: 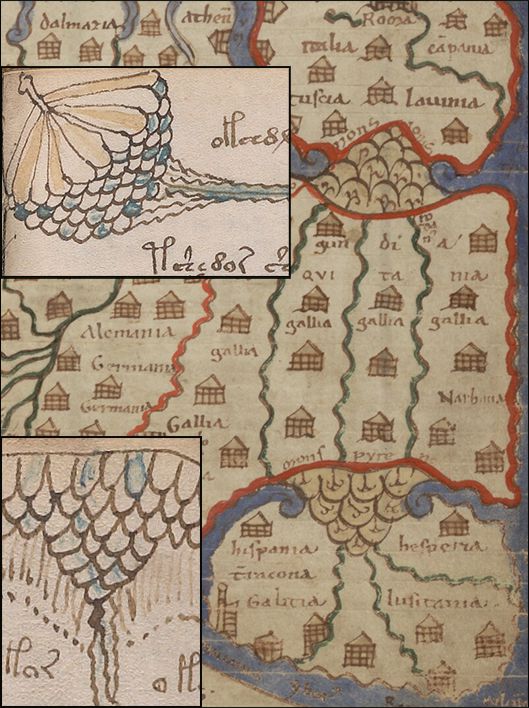 The likeness is especially strong in the bottom pair, where three rivers flow from the overlapping circles. The convention of drawing a mountain or mountain range like a group of overlapping circles is not exclusive to the Liber Floridus and is indeed found in quite a number of early manuscripts. For example, here are some mountains from the Book of Curiosities: 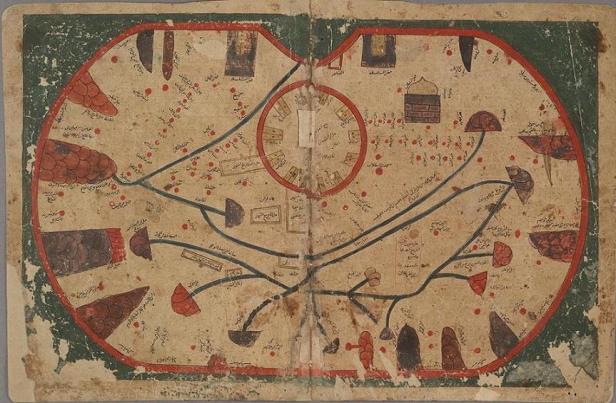 The text with the bottom example is especially interesting, since it explicitly links the mountain (which looks like a pile of rocks) and its nearby lake to the origin of floods. “The floods of the Nile are drawn out from this lake”. While this mountain in a lake is mythical – as the origins of the Nile traditionally were – our examples show that naturally a link was seen between mountains and great rivers.

So just as a test to see if this hypothesis can get off the ground, let’s start puzzling. In order to present our folios in a blog-friendly way, I made schematic versions of each. Here’s an overview of the symbols: 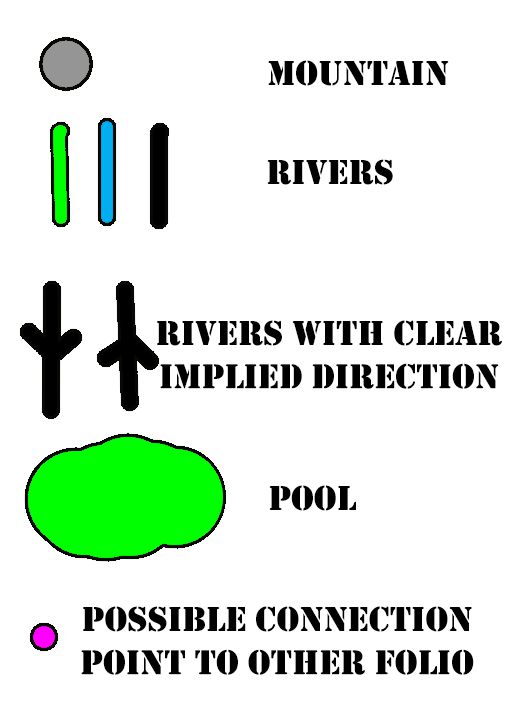 All water flows and pools will be marked in their color, either blue, green or blank. If a direction can be glanced from the image, it will be indicated with a single arrow on the river. Pink dots will mark places where a river suddenly appears or disappears and might be connected to a pink dot on another folio. Grey dots are “mountains”, features which look like natural origins of water and will likely not connect to other folios.

Quire 13b, or what is left of it in the current manuscript, consists of eight pages, or two complete bifolios. Folio 75r is completely isolated; the water originates from what looks like a cloud and elevated terrain and flows down blue rivers and a large green stream, connecting to a separate green pool at the bottom. It won’t be of importance for our “puzzle”, so let’s just get it out of the way already. No pink dots means no possible connectors to other pages.

Furthermore, it’s almost certain that 78v and 81r should be viewed adjacent to each other. This results in the following diagram:

The water appears seemingly out of nowhere (pink dot), and three green pools are connected by a number of blue rivers.

These are the remaining pieces of the puzzle:

At this point I must confess to the reader that I typed this post as this project went along, not knowing what the result might be. And well, the result is, that there are just too many possibilities. One thing which seems clear is that there is a distinction between “water origin” pages and “receiving” pages which appear to be further down the flow.

There is one combination I particularly like, since it would explain why there is a double-size river on top of f75v. If both 84v and 84r are meant to flow together, they would form this large river which splits into a delta on 75v. The 78v-81r bifolio is clearly a terminus, and I’m not certain of the position of 81v – it’s a bit of a mess, just like this whole subquire.

As always, feel free to correct my interpretations or suggest improvements. This was mostly a test to see how well the pages would translate to a more schematic overview, and I’m rather satisfied with the results. But to know if and how the pieces can be connected is, as usual, dependent on the text.

The order of the folios – or if there is one to begin with – is not the real point of this post though. While playing around with the above diagrams, they suddenly reminded me of something I had seen a while ago. A map of the flow of the Nile in an 11th century Arab manuscript.

In the manuscript, this map had been flipped horizontally. When I turned it again, I noticed something strange. I had lost all my modern conceptions of what a map should be, and the Nile looked fine with the South side up.

After having drawn an abstract version of the Voynich maps, something seemed natural about placing the mountains on top, the high ground from whence the water comes, makes its way through various blue lakes and terminates in a square – the great green sea.

All this just to say, if there is one point I want to make in this post, it is this: the nymphs are not really bathing ladies. They are metaphors.

17 thoughts on “Questioning Quire 13b”