As we enter the third month of 2020, I finally found some time to write my first blog post of the year. While reading A Companion to Byzantine Illustrated Manuscripts (Chapter 4, Scientific, Medical and Technical Manuscripts by Stavros Lazaris), one manuscript drew my attention, and I do not recall having read about it before. This surprised me, since its illustrations bear unusually strong resemblances to the Voynich manuscript’s section with containers and small plant images (traditionally known as the pharma section).

Nicander (2nd century BCE) was born near Colophon, an Ionian city on the western coast of present day Turkey. His longest surviving poem is the Theriaca (Gr. θηριακά,  “having to do with venomous animals”) about venomous beasts like snakes and scorpions. Similarly, his Alexipharmaca deals with various types of poisons and their antidotes. He also wrote about farming, beekeeping, language, history… One of his lost works is the Heteroeumena, a collection of metamorphosis myths that served as one of Ovid’s sources.

Only one illustrated copy of the Theriaca and Alexipharmaca survives in an 11th century manuscript now held in Paris. As far as I was able to tell, BNF suppl. gr. 247 (viewable on Gallica) has not yet been discussed in connection to the VM (though see Diane O’Donovan’s post on Nicander’s connection to stars-as-flowers here).

Its 54 surviving miniatures are unframed and inserted in various positions in the text. Lazaris, and others before him, have noted the “misuse of reserved space”, where lots of awkward white space is left on various pages. He attributes this to “a poor estimate due to the use of a model in a different format than the copy (copying from a volumen to a codex, or from a larger codex to a smaller one).” It is possible that the makers of the VM faced a similar challenge, if its images and/or text were copied from somewhere. If so, it looks like they solved this issue by drawing the images first, and letting the text occupy the gaps. 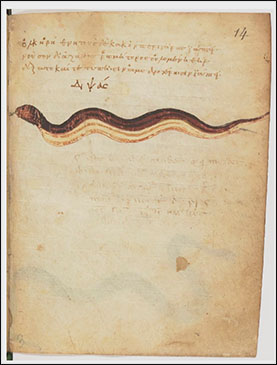 Unfortunately, Lazaris does not specifically discuss the pages I find most interesting. I will discuss these later in this post, but first…

I would like to compare certain pages from gr.247 to the VM small-plants section. But before we get to that, we must get a better feel for the way this section is constructed. There are plant pictures, drawings of intricate objects (vessels?) and text. And those are structured surprisingly consistently. 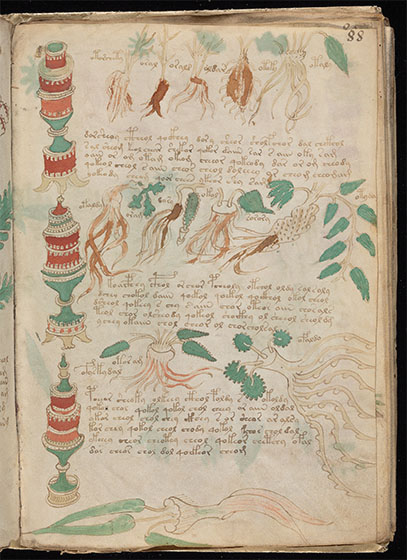 f88r (above): three vessels, each flanked by a horizontal row of labelled plants (5-4-2) and a paragraph of text. One large horizontal plant bottom, which may belong to the third row. It looks as if the page consists of three horizontal strips. If it is true that each vessel+paragraph designates one group, then the number of plants per group is 5-4-3.

f88v: exactly the same setup. Number of plants per vessel+paragraph is 4-4-3.

f89r2 (pictured above right, fouldout part): here we have the same layout again, only now there are four horizontal strips. Four vessels, each with a paragraph and a row of labelled plants. Plants per row: 4-2-6-4.

The “horizontality” of this page is accentuated by the use of the “one-and-a-half” size foldout. To maintain a layout like this would have been difficult within the confines of a standard VM folio, which may be why foldouts were required here.

Then the section is interrupted by a number of large-plant folios. It is generally believed that the current page order was not the original one. The next small-plant page is one with simpler containers and a larger number of roots. As Nick Pelling argued long ago, folios like this one likely originally preceded those with more complex vessels. For the current post, it is interesting to keep in mind that Nick believes the more fancy containers to be an evolution of the simpler ones.

Still, the layout remains the same.

f100r: 11-5; while f99 was brown and rooty, this one is green and leafy. Again, the first strip contains two rows of images (pictured below). 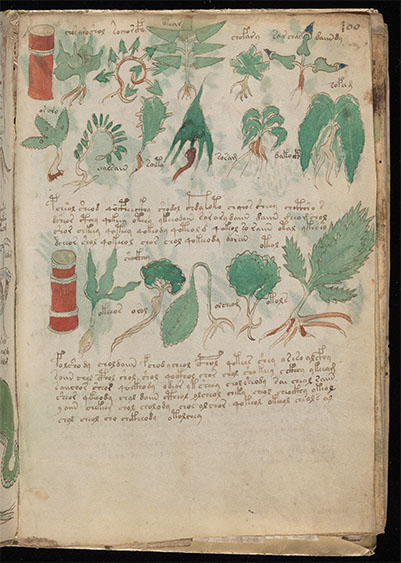 f100v: one vessel and one paragraph, 13 labelled plant images in three rows.

f101r is the first one to experience real issues with the “strips” system of vessel+paragraph+labelled plants.

There is one group of plants on top, one at the bottom. Two vessels in the left margin and two paragraphs of text. However, the second vessel flanks the first paragraph, and a third, relatively uncolored vessel is hiding among the bottom row of plants. Additionally, the plants are not labelled.

EDIT 03/03: Ger Hungerink correctly remarked in the comments that this page actually contains three paragraphs, matching its three vessels. Hence, f101r is more in line with the system than I thought. Still, the positioning of the elements is unusual (possibly due to the large amount of plants) and labels are lacking.

f101v: its reverse side does a better job, with first three rows of labelled plants, each preceded by a vessel, followed by three paragraphs (presumably one for each row). Plants per row: 9-9-10.

In conclusion we can say that there is a very clear structure to the small-plants section. For each vessel, there is one paragraph and one group of plants. The number of plants per “strip” vary from one to fourteen. Usually these plants form one horizontal row, but in some cases there are so many that they need a second row. I hypothesize that the “horizontal nature” of this section caused the need for foldouts.

VM-like arrangements in the Paris Nicander

Since the Theriaca and Alexipharmaca also deal with antidotes (and in the case of the latter, poisonous plants), the Paris MS also contains many images of plants. On a number of pages, several smaller plant images are grouped, at times depicted together with a vessel and other materials. The plants are generally labelled and shown with prominent roots.

Let us first get out of the way that the makeup of its image groups is much more variable than that in the VM. Below, for example, vessel – human figure – vessel – plant. There are also examples of pages with animals and other substances.

Now the more relevant examples. Let’s take them in order:

We then skip a lot of pages about snakes, to resume on f16r:

We then skip a section about scorpions and more snakes, to resurface at f27v:

In summary, the exact VM setup, where various “vessel+text+plants”-strips are grouped on a page still eludes us. But the Paris Nicander has all required ingredients and is probably the closest parallel I have seen so far. It may give a good idea of the kind of source the VM small-plants section is based on.

If I understand correctly, the illuminations generally do not illustrate the text directly. If this is the case, then maybe the labels don’t recur in the accompanying text, as is also the case in the VM. But further study into this matter is required.

The most VM-like vessels (f5r)

One page in particular drew my attention, the illustrations on f5r:

The BNF describes it as follows:

The first label, γεωργὸς τρίβων βοτάνας, translates as “worker grinding herbs”. The green plant in the middle is μολόχη, “mallow”.  The green thing next to it is κάμπη, “catterpillar”. The orange thing is σίλφιον, “silphium”, and the plant with pink flowers is a rose.

Unfortunately, the object on both sides of the grinding man are not labelled, though I can only assume thay they are part of the grinding scene. Did they contain the herbs to be grinded? Are they also for grinding? Or perhaps for mixing the ground herbs with liquids? Maybe it’s in the text? At this point I don’t know, and I have not yet found a description in the literature.

But they look quite familiar. Note how the containers are made up of sections and get narrower towards the top. And the not-entirely-elegant perspective of the openings.

What are these things?

This is not the first time a Byzantine manuscript shows layout similarities to a VM section. See for example my earlier study of the large-plants layout: Men and Manuscripts around the Prodromos Petra Monastery and VViews’ post on the marginal psalters for Q13. Why is this the case?

There are in my opinion two possible explanations. First, in general, Byzantine manuscripts differ in their treatment of images compared to the text. They usually don’t frame images, allowing for a more organic whole. The simple fact that Byzantine illustrations inhabit the page in a way more similar to the VM images may give them an edge in comparisons.

Secondly though, I believe that by now we have gathered several different indications. Therefore I think it is likely the VM sources included Byzantine works, or at least works illustrated in the Byzantine stile.